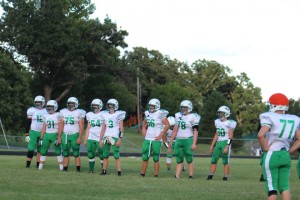 The annual Gatorade Scrimmage turned out to be another success for the Pierce City football team. The varsity put on a show against their “2’s” as they broke out an 80 yard touchdown run by sophomore quarterback, Gage Brown, on the very first play.

One player that caught the eye of head coach Brad Hocker, was junior running back Mitchell Copening. He rushed his way for 2 touchdowns in his first action viewed by fans. Mitchell is a new face on the football squad due to a back injury that kept him out of action for the past two football seasons. Hocker likes his exceptional speed and says he does a good job of “keeping his feet under him.” 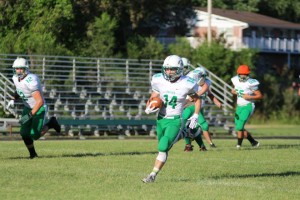 Hocker is also pleased what he saw out of senior defensive ends, Cody Cameron and Sabin Wright. The offensive line had no way of stopping the senior duo, as they blew through the line every play. Coach Hocker said the defense will be at another level if those two can get in the backfield consistently.

Now the team looks forward to Friday night, where they travel to Stockton and participate in the jamboree. The jamboree will begin at 7:00 and Pierce City will face three teams Stockton, Lamar, and Nevada, all of which are larger schools. To make things even tougher, Lamar is the reigning class 2 state champion. 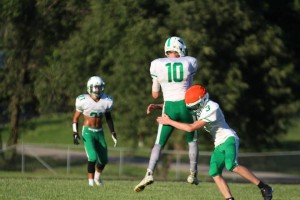 Senior wider receiver and defensive back Ian Burt, had only good things to say about the upcoming season. Ian says, “we all have become smarter at reading the opposing offense and we are able to switch coverage at the line.” He really trusts the new defense put in by the coaching staff, that includes two new members. One of the new coaches is Jared Frey, an alumni of Pierce City. He coaches the wide receivers and defensive backs. The other new member of the coaching staff is defensive coordinator Gary Pendergraft. All of the players love what he has brought to the table for the Eagle’s defense. The Eagles are looking for big things in the near future.