The Eagles traveled to Carl Junction on Monday, August 24th to open their season against the Carl Junction Junior Varsity Bulldogs. The Pierce City offense got off to a slow start going scoreless in the opening quarter. The Eagles offense starting clicking in the 2nd quarter and they would go on to score 42 points in the final 3 quarters, but came up short with a final score of 42-61. 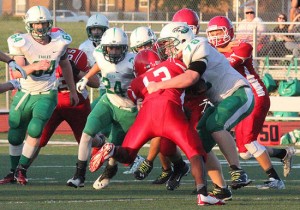 The Eagles defense struggled at times in the defeat, giving up 61 points. Senior Ian Burt said “It’s not that our defense played bad, its just that we gave up the big play too often on 3rd down. We can make some fixes at practice this week and the defense should be better prepared this Friday.”

Pierce City was above average on the other side of the ball scoring 6 touchdowns, giving them 42 points on the night. The running game was there, scoring all of their touchdowns on the ground. Sophomore quarterback Gage Brown got the scoring started when he broke off a long run that resulted in a touchdown. Senior running back Jamie Logan was also a huge part of the Eagles success on the ground, ending his night with 3 scores. The Eagle’s coaching staff is very excited for what he will bring to the table this season. Senior quarterback/wide receiver Avrey Freeman and junior running back Mitchell Copening each added a score in the fourth quarter. Copening’s score would come on a 62 yard run, the longest of the night.

The team now looks forward to this Friday, August 28th when the Eagles will take on the Liberal Bulldogs in their first home game of the season.  Kickoff is scheduled for 7:00 pm.

Thank you for the pictures Monett Times!