September 9th, 2015 the Junior High Lady Eagles welcomed Miller to face off in their first game of the season. 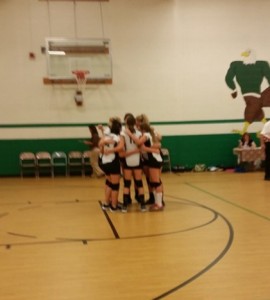 The girls came off this game noting improvements that needed to be made to prepare for their next opponent.

On September 14, 2015 the Junior High Lady Eagles traveled to College Heights to face the Lady Cougars. Taking what they had learned from their previous game, the Ladies stepped up and played well against the Lady Cougars.

The B team brought their A game and battled against College Heights and pulled ahead ending the first set with a score of 25-23. The girls kept fighting through the second set and defeated the Lady Cougars  25-16.

The A team fought just as hard but was unable secure the victory. The girls stayed energetic and battled through the sets ending with a score of 14-25 for the first set and 10-25 for the second. The girls continue to keep an optimistic outlook and look forward to their next match.